There are 10 Assembly Constituencies in Nagaur District, which is as follows →

According to the 2011 census, the population figures of Nagaur district are as follows

This city was ruled by the Nagavatan Jat kings for about 2 thousand years, who were later defeated by the Parmar Rajputs. After the Mughal rule was powerless, the Rathore kings of Jodhpur gained control over Nagaur.
Nagaur district History Nagaur holds an important place in history due to the valor stories of Amarsingh Rathod, the valiant son of the then Maharaja Gajsingh I of Jodhpur.

Nagaur got the status of District Headquarters after independence and on the formation of Rajasthan and the then Prime Minister Shri,  Jawaharlal Nehru gave Shri Ganesh of Panchayati Raj on 2 October 1959 from Nagaur itself. 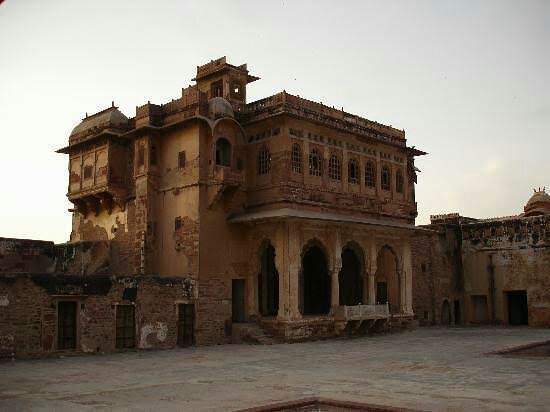 The specialty of the Nagaur Fort is that the artillery shells fired from outside this fort go out from the top without damaging the palaces of the fort. Nagaur district History The fort of Nagaur has a total of 28 bastions. Akbar got the Venus tank, beautiful fountain, and Akbari mosque built here. Prince Charles of England has visited this fort. Badal Mahal and Sheeshmahal of this fort are famous for murals. The Shaurya saga of Amarsingh is associated with this fort. In 2007, the fort was awarded the “Award of Excellence” by UNESCO for its cleanliness.

Fort of Kuchaman → Surname – Sirmaur of Jagiri Fort and Anakhala Fort. Nagaur district History This giri fort was built by the Medtia ruler ‘Jhalam Singh’ with the blessings of the Vankhandi Mahatma. The famous statement about this fort – “Such a fort may not belong to Ranee Jae, but it does not have it to Thukrani Jaaye.”

Khimsar Fort- Aurangzeb had stayed in this fort, presently this fort is a heritage hotel.

Dadhimati Mata – The temple of Dadhimati Mata is located in Manglod, Jayal (Nagaur). Nagaur district History This mother is the total goddess of Dadhich Brahmins. It is worshiped in Navratras. The area around Manglod has been referred to as the Kusha region in the Puranas. There is a depiction of this mother’s temple from the exile of Rama to the slaughter of Ravana.

Bhanwal Mata – Nagaur, a goat is sacrificed in the temple of this mother.

Nagaur district History The main place of Tejaji – Parbatsar (Nagaur) fair – Bhadrapad Shukla – Dashami. This fair is the largest cattle fair in Rajasthan in terms of income. Most of the agricultural implements are bought and sold in this fair.

Hariram Baba – Jhorada village (Nagaur) Hariram Baba is famous for the treatment of snakebite. Instead of the idol in the temple, there is a snake bambi.

Veer Kallaji – Kallaji was born in Samiyana (Merta, Nagaur). Nagaur district History His Kuldevi was Naganechi Mata. Kallaji is considered to be the “incarnation of Sheshnag”. On 23 February 1568, Kallaji fought with Akbar by placing his uncle Jaimal on the shoulders. These are called lokadevata of 4 hands and 2 heads. Kallaji’s umbrella is in Bhairav ​​Pol of Chittor fort. His main back-ranela (Sirohi), the main tithi sthal-samaliya (Dungarpur).

Meera Bai – Meera Bai was born in 1498 AD in Kurki village (Pali). Mirambai’s father Ratan Singh Bajoli was the vassal of Merta. Nagaur district History So Mirabai was brought up in Merta. Mirambai’s husband was Bhojraj, son of Maharana Sanga, who died in the Battle of Khatoli (1517). Vikramaditya drank the cup of poison to Meerambai, considering it to be nectar, and was drank by Meera Bai. Meera Bai spent her last life in Dakor (Dwarka, Gujarat).

Saint Hammi-uddin-His dargah is in Nagaur (Tarakin’s dargah). Urs seems to be the second largest of Rajasthan here. He is called the second Khwaja of Rajasthan. His surname – Sultan of the sannyasis. His tomb is near the pond of Ginani.

There is a temple of Jeena Mata in Maroth of Nagaur.

Other important facts of Nagaur district

The Panchayati Raj system in India was started on 2 October 1959 by Jawaharlal Nehru from Bagdari village of Merta in Nagaur district. At the same time, Panchayati Raj system was started in Rajasthan as well as in Andhra Pradesh.
Most cattle fair in Rajasthan — Nagaur
Rotu (Nagaur), the most religious place of the Vishnai sect.
Devoted poetess Karamabai is related to Nagaur.
The article of the Kanati Masjid – (1641) Nagaur – According to this, many Chauhans became Muslims during the period of Gauri.
Amarpur article, Bakalia article – Nagaur.
Jami Masjid article — Merta (Nagaur)
Kurada (Parbatsar) – copper tools have been found here. Before the reorganization of the state of Rajasthan, the first copper material was found here in 1934.

Khudi – (Nagaur), got a bowl of corrugated spout from here.
‘Matire ki Raad’ – In 1644 AD, between Amar Singh, the ruler of Nagaur and Karan Singh, the ruler of Bikaner. In which Amarsingh emerged victorious. (Note- In some books, Bikaner is also called Victory, which should be correct as only the army from Nagaur had no king or commander of the war, so there may be defeat.)